By TechAdmin on 1st April 2018 in Gambling News, General

E-sports are defined as games played at a professional level where competitors play against each other and audiences watch in arenas or online via social platforms. The industry has grown significantly during the past decade, with popular Multiplayer Online Battle Arena (MOBAs) and first-person shooters (FPS) including League of Legends and Counter-Strike: Global Offensive now captivating huge audiences and carrying substantial cash prizes for winners. 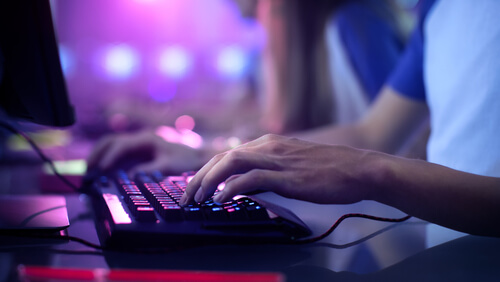 Where it all began

The first e-sports event actually took place in 1972 when students at Stanford University faced off in space combat video game Spacewar for an annual subscription of Rolling Stone magazine. However, it wasn’t until 1980 that the e-sports we know today arrived, when a sizeable 10,000 participants competed in the Space Invaders Championship.

Internet connectivity was the next major driving force behind the evolution of e-sports, as it allowed gamers to connect and compete online. The Red Annihilation tournament – centred around the popular FPS Doom – drew around 2,000 participants and the lucky winner got to drive away in a Ferrari. Just weeks later in 1997, a new gaming league was formed with cash prizes and it marked the beginning of regular e-sport competition.

Fast forward to 2018 and there are now scores of video games that are played competitively. League of Legends continues to be one of the most popular MOBAs, mixing frenetic action and strategy as two five-strong teams attempt to destroy their opponent’s base.

Dota 2 is another MOBA, perhaps with a higher skill ceiling compared to other games in the genre, as it possesses complex mechanics. Matches in both typically last between 25 and 45 minutes.

Overwatch and Counter-Strike: Global Offensive headline the FPS category of e-sports. CS:GO features two teams playing as terrorists or counter-terrorists who compete on unique maps to either detonate a bomb or prevent it from going off.

Overwatch is a team-based shooter where one side attempts to escort a payload through separate checkpoints and the other tries to stop them. E-sports are not limited to these categories or games, however. Call of Duty and Halo are popular console franchises that have enjoyed e-sport gatherings, as has fighting game Street Fighter V.

Digital platforms are the best place to view e-sports. Twitch is the premier streaming space for video games and viewers can watch renowned teams such as G2 Esports and the latest action from a range of events for free on a variety of connected devices. Larger events are shown by the BBC, ESPN and other broadcasters, while fans can also watch in person at arenas where e-sports take place.

E-sports betting is easier than ever before as more casinos and online platforms are now including these events on their betting rosters and sportsbooks. Revenue in the e-sports industry is expected to surpass £1bn by 2020, so punters are likely to see more markets and options for betting on matches in the near future.

E-sports have grown exponentially in a short space of time, and the frequency and popularity of events are expected to increase further as it occupies a more prominent role in the sporting calendar.