Double Exposure Blackjack might sound a little racy, but the game is a worthwhile real money bet, and the only exposing that’s going on is the dealer’s two cards. So keep your belts buckled as we explore this exciting Blackjack game that is sure to find legions of fans in the Blackjack community. Blackjack is such a popular Table Game that many variants have developed to ensure playing is always fresh and exciting.

Let’s start by looking at how Double Exposure Blackjack is the same as standard Blackjack – it always helps to find a familiar point of reference before we delve into the finer nuances of the game. Like any form of Blackjack, the aim of the game is to beat the dealer by achieving a hand that has a total card value as close to, but without exceeding, 21. If the dealer’s hand exceeds 21, the dealer “goes bust” and the player wins. Now to get Blackjack, the player should be dealt a hand that consists of an Ace and a card with the numerical value of 10 – a 10 card or a Face card (i.e. King, Queen or Jack). This hand cannot be beaten and stands. Now should the highly unusual event of both the dealer and the player being dealt a Blackjack hand, then the player’s hand will always trump the dealer’s! So far, so good.

Shall we turn our attention to what it is that makes Double Exposure Blackjack so very special? To begin with, the game plays from 8 standard 52-card decks that are, of course, shuffled after the completion of every game. Now things start to get interesting. The big ‘deal’ in this version of Blackjack is that both of the dealer’s cards are dealt face up rather than having one card visible and the other face down for a later reveal. On face value this seems fantastic as it eliminates the house edge and means players are able to plan their next move based on the cards the dealer holds. This should be a huge player advantage.

But before everyone gets too excited, let’s take a closer look at some of the other rules. When the player’s hand and the dealer’s hand tie, this is called a Push. In Double Exposure Blackjack the dealer wins on all Pushes, except if it’s a tied Blackjack – then the player is the victor. But be aware that the payout on Blackjack is 1:1.

Don’t get disheartened, though. There are many unique tweaks to the game that work in the player’s favour. The Splitting rules are a prime example: Players can split two cards that have the same value (i.e. a King and a 10 or two 5s) and the hand is divided into two separate hands and a real money bet of the same amount is placed on the second hand. Players can also split Aces – each Ace is dealt one more card and the hand stands. And players can split up to three times per game, which means four hands. Another great aspect to Double Exposure Blackjack is revealed in the double down rules. So players can double down (this means doubling the original wager after receiving the first two cards) if the value of the first two cards is 9, 10, or 11 and in this particular game they can double after a split! 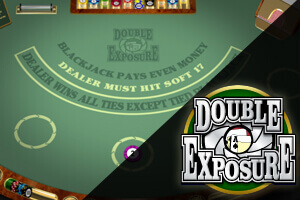 I think Double Exposure Blackjack is a hidden gem in Microgaming™’s Blackjack portfolio. And as long as players keep a cool head while playing and don’t lose their minds at the prospect of the dealer’s exposed cards, they are sure to have a great time playing. This game gets a solid four out five.