After a well-thought-out campaign the highly anticipated Video Slot, The Dark KnightTM was released with favourable reviews and general fanfare. Let’s take a look at what really sets this blockbuster Video Slot apart from the other franchised titles available through MicrogamingTM.

Just as the Caped Crusader is shrouded in darkness, this release offers a distinctly morose aesthetic and keeps its secret weapon well concealed, that is until it explodes onto your screen and is sure to stun you.

The 5-Reel, 243-Ways-to-Win Slot’s crowning glory is the 4-Tiered Progressive Jackpot linked to the Mega Moolah Jackpot network, which means you can always win at least 1,000,000 on the Mega Jackpot.

You can gain access to the Progressive Jackpots through a randomly triggered Bonus Wheel feature that allows you to choose one of the two main characters – the Jackpot awarded is based on the segment that aligns to your chosen character.  There are four Jackpot pools namely the Mini, Minor, Major and Mega. You’ll be looking to the Major and Mega Jackpots for a sizeable win although the Minor can habitually build up to a rather a tidy amount. 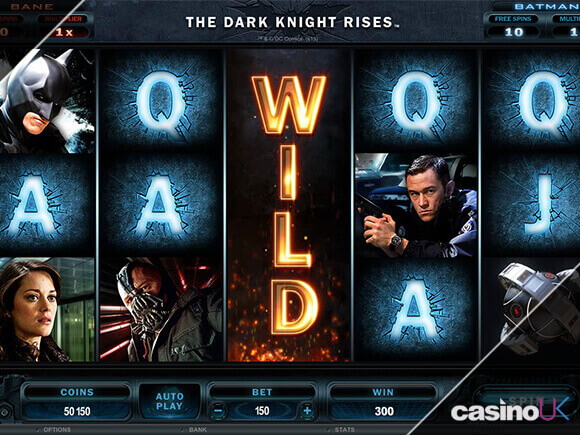 On top of that you can also ready yourself for an arsenal of features that will surely make you smile wider than the Joker, with or without all the make-up – it’s really up to you. Prepare for stacked Wilds, a special Batman and Joker feature that will add on extra awards, as well as a Free Spins feature triggered by the Scatter.

This great feature can occur during the base game and during Free Spins when the two main characters of the film, Batman and The Joker make their appearance on the screen to award a variety of features and prizes such as instant prizes of between 150 and 1500 coins, random Multipliers of up to 5x, up to three Wild Reels, wild Symbols and Wild Re-Spins.

If 3 or more of the Joker Graffiti Scatters land anywhere on the Reels, a Bonus round will be triggered and 15 Free Spins starting at a 2x Multiplier will be awarded. The Joker can appear during the Free Spins Bonus to award additional Free Spins and/or increase the Multiplier.

This feature doesn’t reward your pocket but it sure does reward your eyes – every time the Reels spin you are treated to cinematic scenes that shine through the transparent Reels.

When we took time to consider all of the astounding features that this game offered, we couldn’t help but give it 5 out of 5. Even if you’re not batty about the movies you’ll no doubt appreciate everything this mysterious Slot has to offer.

What really sold us was the great gameplay, vivid graphics and film sequences, the amazing soundtrack that accompanies the action and not forgetting the Progressive Jackpot!