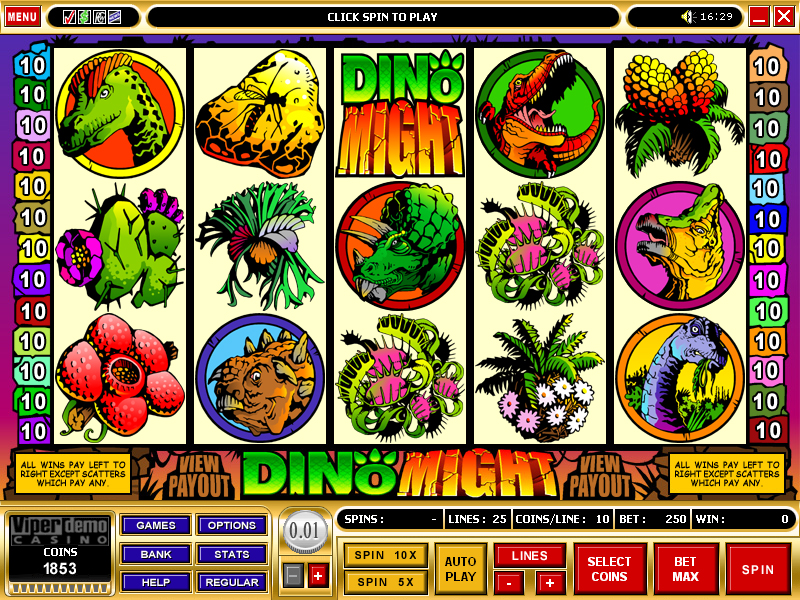 Take a perilous, adventurous and exhilarating paleontological journey over 160 million years back in time to a prehistoric land that time forgot, when the mighty, monolithic Dinosaurs roamed the Earth! You will be terrified, awestruck and inspired in equal measure by the vicious and predatorial Tyrannosaurus Rex –the King of the Jurassic Jungle with his giant, bipedal hind-legs and his sharply-clawed two-digit clenching forelimbs that could swiftly rip its prey to pieces; the gargantuan, imposing and unyielding reptilian monster, the Megalosaurus, whose formidable shadow towers above all other species; and, of course, you will also encounter those heavily armored and spiked herbivorous gentle giants, the Stegosaurus and the Triceratops! Welcome to the world of Dino Might Online Slot!

Dino Might Online Slot consists of 5 reels, an impressive 25 paylines, and a maximum bet of 10 coins per line. The coin-size value ranges from $0.01 to $0.50, and with a maximum jackpot of 80,000 coins, you stand the chance of winning a Jurassic up to $40,000.00 in cash! The ‘Dino Might’ stone monolith logo acts as the game’s Wild symbol, and it truly represents the untamed nature of the Paleolithic jungles  when paying out 8,000 coins whenever 5 Wilds land across the activated payline, and doubling all payline wins when substituting to complete a winning combination.

The Dino Might Online Slot symbol substitutes for all other symbols on the reels except for the Scatter and the Bonus Trigger symbol.  The Scatter symbol is represented by a prehistoric mosquito fossilized in ancient Baltic Amber. 3,4 or 5 Scatters appearing anywhere on the reels triggers the Match Bonus feature, whereby you need to match 4 of the same symbol to stand a chance of winning up to 20,000 coins in bonus jackpot wins.

Find the Mighty Multiplier and boost your winnings even further –and remember, all your scatter and bonus wins are added to the existing payline wins!  The speckled, green Triggersaurus acts as the Triasically-inclined Bonus Game trigger symbol which also pays out up to 4,500 coins when 3 symbols land on the reels.

The presence of 3, 4 or 5 symbols triggers the Bonus Game, wherein you need to match for symbols on a puzzle to reveal a beautiful image of dinosaurs roaming wild and free in the lush yet tranquil jungle – you could win up to 5,000 coins, and finding the extra 2x multiplier figure boosts that amount to an Allosauric 10,000 coins! In the land before time, when the Earth was still young and its continents had only begun their epic journey of separation from one-another, breaking up their originating Pangaea mega-continent formation, before the Cretaceous-Tertiary Extinction Event ushered in the total destruction of a species and an era, there was the rule of the Jurassic Age –the age of the Reptiles, the age of Dino Might Online Slot!