Microgaming™ have joined forces with HBO® to bring Slots players as well as fans of the series, an epic adventure in the form of the Game of Thrones™ Video Slot.

From the get-go the Video Slot sets out to impress – the introduction video features stunningly animated graphics and sets the pace for what’s to come. The hype has certainly paid off as people couldn’t wait to get their hands on this Video Slot that features a tremendous theme and a splendid jackpot as well as a number of great features.

The 5-Reel Slot is available in both 15-Line and 243-Ways-to-Win versions giving players a choice of format. It is also available in a number of platforms such as Viper, Flash and Mobile making it accessible to all players as everybody’s vying for a piece of blockbuster action. 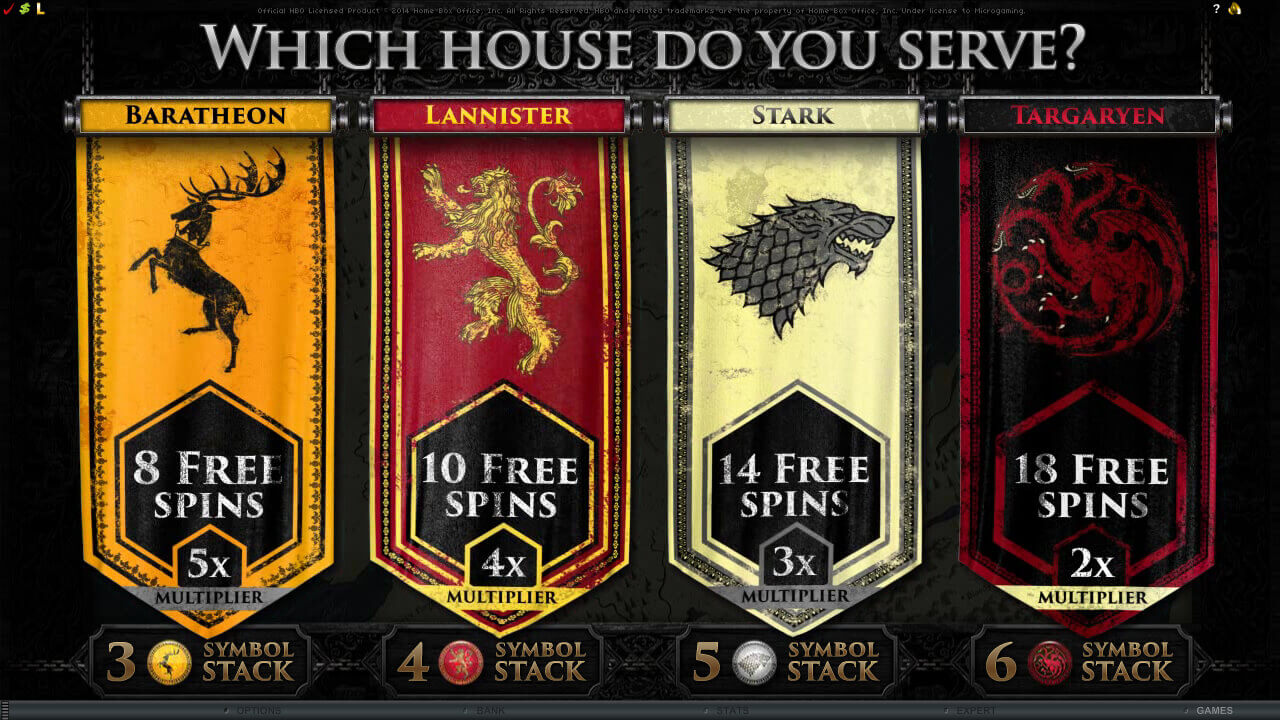 The game revolves around the four great houses of Westeros and their pursuit for the Iron Throne – gameplay is accompanied by splendid video footage of the hit series as well as the original soundtrack thereof.

The game boasts a number of fantastic features, the most prominent being the Free Spins feature that is activated once three or more Iron Throne Scatters appear on the Reels. Although players need not despair at the sight of two Scatters, as it reveals a consolation prize in the form of a dragon’s egg which holds a random cash prize.

Once the Free Spins feature appears players can choose from four different Free Spin offerings that represent the four houses:

House Baratheon reigns over 8 Free Spins and boasts a furious 5x Multiplier – the highest Multiplier in the entire territory. In addition the Baratheon High Symbol is stacked 3 high throughout the Reels.

Those devoted to the House of Lannister – will be rewarded for their loyalty with a roaring 10 Free Spins at a 4x Multiplier and the Lannister High Symbol is stacked 4 high.

House Stark’s Free Spin feature offers a howling 14 Free Spins, accompanied by 3x multiplier with Reels adorned by the Stark High Symbols stacked 5 high. Winter is coming but these Free Spins are sure to heat up gameplay.

House Targaryen’s Free Spin feature offers the highest number of Free Spins in the game. The fiery 18 Free Spins are completed by a 2x Multiplier and stacked Targaryen High Symbols. Fire and blood will seal the deal in this feature.

Players will be pleased to hear that their allegiance to any given house ensures that Free Spins can be re-triggered.

If that wasn’t enough the Video Slot also offers a fantastic Gamble Feature comprising of a coin flip that not only offers great rewards but take players on a majestic journey into inhospitable territory, with menacing creatures, in search of more wealth. For every coin flip called correctly the player will advance onto the Trail Map’s next checkpoint that holds its own prize.

I’m giving the game a respectable score of 4 out of 5 as it still is a new game and I’d like to see how punters react to it. The Free Spins really salvage the game from a lower score as it does impress with its graphics and soundtrack but Free Spins always ensure that players come back for more. This Slot is ideal for experienced players but also for true fans of Game of ThronesTM.