This is an adventure for all taking you through the streets of England on a quest to take down Blackwood. The game play is designed around a 5 reel and 30 payline structure. The game has minimum bet of £0.60 per spin and a maximum bet of £300. There are several games and bonuses that can be enjoyed on the game. There are thrills and spills for everybody and whether or not you are a Robert Downey Jnr. fan or not, this online slot sure has a lot to offer. Read on to discover more about the adventure that awaits!

Sherlock Holmes and the hunt for Blackwood Online Slot Theme, Symbols and Scatters

The watch symbols can earn you up to 30× your coin value, so will the dog, the pipe, the magnifying glass and the violin. The people symbols have a potential of earning you 75× your coin value. These include inspector Lestrade the Scotland Yard detective. The teamwork symbol in which the Sherlock Holmes symbol and the Doctor Watson symbol are joined together has an earning potential of 300× Coin value.

The game has a mystery multiplier that is triggered when a spin fails to produce a bonus feature. This only applies to the base game. A multiplier is then automatically added to that spin.  The value of the multiplier ranges from 2× to 10.

There is the teamwork feature which triggers randomly in the base game. The Sherlock symbols and Watson symbols come together to make one Holmes/Watson figure. This new symbol increases winning potential.

At times two or more random features trigger at the same time. This results in you getting potentially large wins.

Get three scatter symbols in reels 1, 3 and 5 in a single spin and you activate the picker puzzle. In this game you choose objects from Sherlock’s room and use them to find clues. The clues are then used to reveal prizes and bonus features. In this game if you collect 3 maps you will trigger the hunt bonus. This bonus has 10 free spins. Collect four maps and get 15 free spins. 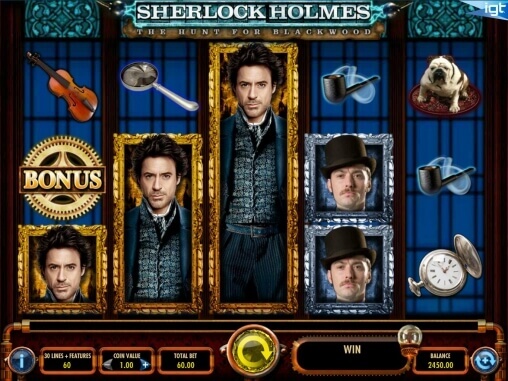 Overview of Sherlock Holmes and the hunt for Blackwood Online Slot

There a lots of bonuses in this online slot and several games. These may be a bit distracting to some players. However if you a true Sherlock Holmes fan you will love this video slot. This is a perfect video slot for all fans of the great detective. You get to hunt down Lord Blackwood with your favourite investigator. You do this while earning real cash with some of the best bonus features. IGT created a real work of art in this Slot