The International Gaming Technology (IGT) Video Slot; Star Trek Online Slot is based on the highly successful science fiction franchise Star Trek. Characters and symbols are based on the highly popular television series and movie franchise. Fans of the series will really enjoy playing the game as they will get to relive the voyages into deep space.

IGT tried to remain as true as possible to the reputation of quality graphics and visuals that were created through the television show. This is one of the reasons why fans of the television series will love the game. The interface design makes the game a pleasure to play even for non fans. The ship’s crew are used as the major symbols on the video slot.

The Star Trek online video slot has 5 reels with 30 paylines. The minimum bet is £0.01 and the maximum bet is £300. Coin size on the video slot ranges between 0.01 and 10. This wide range of coin size makes the suitable for both high rollers and the more conservative gamblers. The slot has an auto play feature which enables player to customise their betting choices and makes spinning easier. Customizable features include coin size, time between bets and number of spins. Once this is set you just press the auto play button. You will no longer have to endure the hustle of pressing bet in very spin. You get to sit and enjoy while the slot does all the work for you. The maximum payout from the game is a staggering £250 000.00

The symbols in the game a real pictures of the crew members. The game does not use animations to depict the characters. The crew members used in the game are the captain and his crew. The crew of Captain Kirk, Scotty, Uhura and Spock are the key symbols. The minor symbols are playing cards. The cards used are ten, Jack, Queen, King and the Ace. The Star Trek logo is used in the game as the Wilds Symbol. The Scatter Symbol is the blue ‘Bonus’ symbol. Symbols of the characters are in different colours, Captain Kirk in yellow, Uhura in red, Scotty in Black and white and Spock in blue.

The wild icon which is the Star Trek logo appears only on reels two, three, four and five. The wild symbol can exchange itself with any other symbol except the scatter symbol. By doing this it gives you a greater chance of getting a winning combination.

The scatter symbol when it appears can activate the Captain Kirk free spun bonus. This is if 3 or more of these symbols appear on the reels. In this game you can get six free spins. Hitting a winning combination in this bonus game gets you your payout multiplied by 3×. You will also reactivate your free sounds bonus. The reactivation can continue happening up to a maximum of 250 free spins. 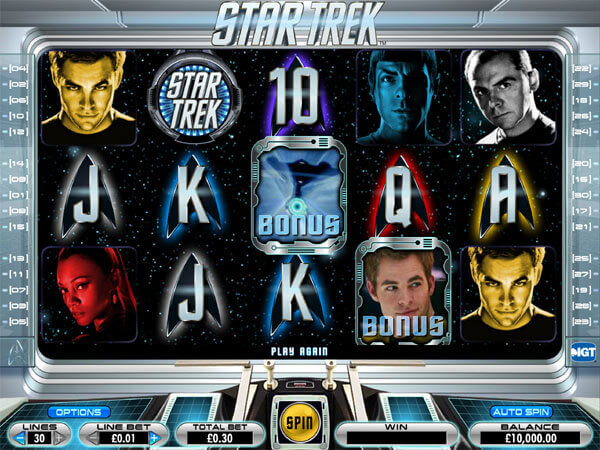 This is definitely not only a game for Star Trek fans. The Star Trek Online Slot has bonuses that anyone who enjoys playing online slots would love. The graphics add to a totally great game to make it even more awesome. A must play for every slot lover. Casino UK encourages all readers to jet off to outer space, be beamed up by Scotty and take a part in the ongoing SciFi thrill that is Star Trek!