We will never know whether it is the great storyline, the ancient Egyptian setting or Playtech’s innovative skills that led to the creation of this great game. The Mummy Online Slot is just in its own league.

The Mummy Online Slot has 5 reels and 25 paylines. The paylines are fixed for every bet. Coin size ranges from £0.04 to£ 20.00. The minimum bet is £1.00 and the maximum bet is £500. These figures are determined by multiplying the coin size and the fixed paylines which is 25.

The game is based on the blockbuster movie The Mummy. The theme of the video slot from Playtech is based on the movie story line and its characters. The story behind the movie is of a mummy who is resurrected after 3000 years in a tomb. This mummy is not of a Pharaoh but his adviser. The symbols are the main characters of the movie and the items they interact with during the movie.

Major symbols are Rick O’Connell played by Brandon Fraser, the high priest Imohtep (the mummy), Evelyn played by Rachel Weisz and the High priest’s lover, Anck-su-namun. The minor symbols include things such as the scarab beetles, the Urns and the pistols. The wild symbol is the Mummy who is actually the villain. The scatter symbol is the Mummy logo.

The Lost City adventure feature is the bonus hub of this video slot. This feature is triggered randomly during play in the main game. This feature takes you to the lost City of Hamunaptra were the adventure begins. In this mode you will be taken to the chamber of secrets. In this chamber you will be met by six crates. The crates once opened reveal cash prizes. However one of the crates has a collect symbol. When the collect symbol is revealed the game ends. When the game ends you will be awarded a 4× multiplier. The collect symbol also opens the book of the dead. Each time the book is opened you are awarded one of six collectable bonus features. These bonus features are

Other bonus include the ‘Free game with super spin’. When free game symbols fall on reels 1, 3 and 5, wilds are collected and redistributed to the centre three reels for one mega spin. The mummy hunt feature is activated when the mummy hunt symbol appears on reels 1 and 5 at the same time. This triggers a game where you kill mummies. The more you kill the more you win. 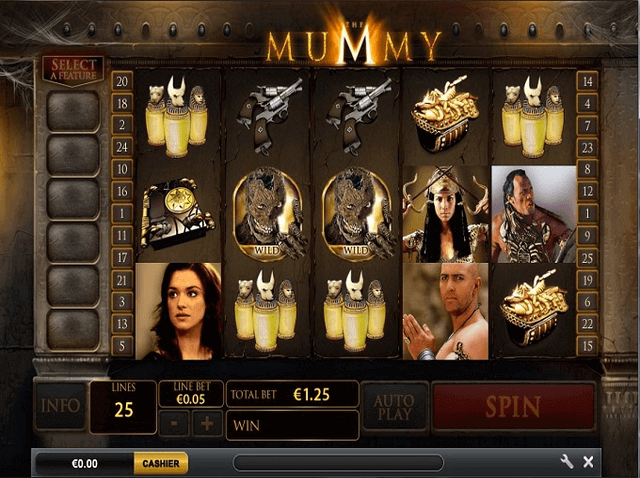 Overview of The Mummy Online Slot

This game really sets the scene and makes for a marvellous adventure. There are a number of bonuses and thrilling games waiting for you to get your hands on. So go forth and explore the ruins of a great ancient society today!