Rhyming Reels – Hearts and Tarts Online Slot is a 5-Reel, 30-Payline game based on the original game, Queen of Hearts. Once again based on the voluptuous matriarch that stole our hearts back in the day when the Nursery Rhyme was repeated to us almost nightly. 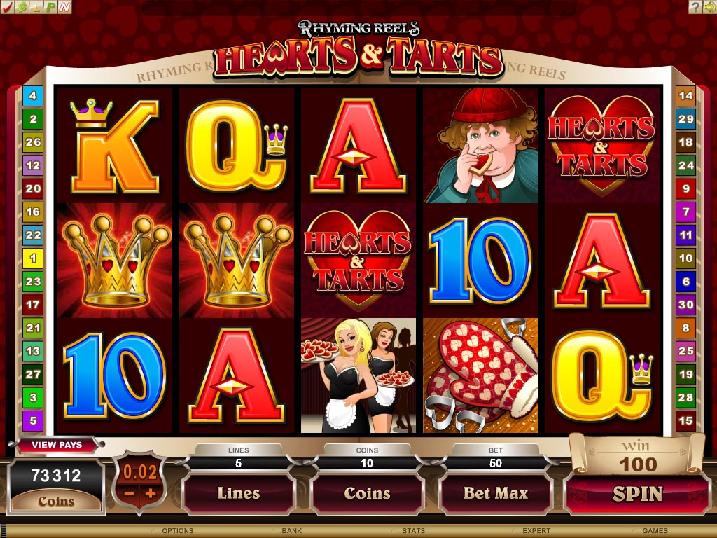 Now, Rhyming Reels – Hearts and Tarts Online Slot game brings you Wilds, Scatters, Multipliers and Free Spins to increase your winning opportunities.  The Wild in this game is the Hearts and Tarts logo. When completing a winning combination, these icons will double your winnings. These symbols can also substitute for any other symbols except for the Scattered Golden Crowns.

The Scatter is a very important symbol in the game, because when 3 to 5 Scatters fall anywhere on the Reels, this triggers the Free Spins Feature. You can win ten Free Spins, and all your winnings during this feature will be doubled, as they are applied with a 2x Multiplier. Free Spins is a recursive feature. Thus it can be re-triggered if another three to five Scatters appear on the Reels during the Free Spins round. During this feature on Rhyming Reels – Hearts and Tarts Online Slot, this icon appears as a Stacked, while the delightful Queen of Hearts herself is Stacked during the Base Game and during the Free Spins Feature.

Throughout the ages, the contrast of light and dark has showed through in games like saints and sinners. Once again, it comes to the forefront of our minds with Rhyming Reels – Hearts and Tarts Online Slot. The famous monarch is about to bring you royal riches, so spin away at the Reels and claim your treasures.