The steam-punk theme of Steam Tower Online Slot takes players back to a time of princes, princesses and fierce dragons. This particular slot has 5 reels and 15 pay lines and when players make a deposit and play for Real Money, a man will move up the tower to rescue the princess from the dragon.

If a fairy tale is what players are in search of when it comes to entertainment, then Steam Tower Online Slot is a great choice and there are also many bonuses to be won throughout the adventure.

Stacked Wilds and a Free Spins Feature with an increasing Multiplier are available and can obviously benefit players quite extensively. Players should also look for as many Stacked Wilds as possible because one or more will trigger the Free Spins feature. Once these features are activated, the man will move level by level, up the steam tower and closer to the princess. With each floor climbed, the player will be rewarded and once the top floor has been reached, the player will get a cash prize of 1000 in coins.

While Steam Tower Online Slot takes players back to the 19th century, their graphics and software is everything but out dated. The game is powered by Net Entertainment which allows for crystal clear images and quite a bit of animation. The dragon flies across the screen ever-so-often, while the little man makes his way up to the princess. 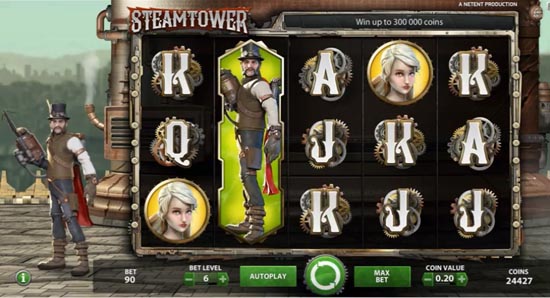 Deposit amounts vary but start from as little as 15p a spin and go up to as much as £150 a spin. It all depends on the players pocket and what they feel most comfortable spending at one time. Steam Tower has also made allowances for all types of players and their expenses, and this is why there is such a broad betting option with regards to the amounts.

Steam Tower Online Slot is enchanting to say the least and will be loved by those who enjoy a progressive game in which the more they bet; the closer they’ll get to the 1000 coins. The graphics are terrific and rather captivating too, which adds to the overall tone of the game, which in our opinion is charming and delightful.