We’re debunking casino myths about Roulette strategy. There are plenty of dodgy operatives willing to sell you plenty of betting systems to beat the house at Roulette, but first a word of warning. The difference between a betting system and a strategy is that a betting system will rely on unrealistic lucky streaks, manipulate the gambler’s fallacy, and / or ignore the limitations of a real-life Roulette table. Roulette Strategy is one of the most important factors when playing online.

Let’s take a look at these elements one by one, and disclose which betting systems you should watch out for when spinning on the roulette wheel both online and off.

Many betting systems will rely on unrealistic winning streaks, and ignore realistic odds. For example, a popular betting system known as the Martingale suggests that a player chase their losses until they win. This is done by doubling up the amount you bet every time you lose, and going back to the original amount when you win. So when you bet $5 on an even-money bet, lose, then bet $10, lose again, bet $20 and win, you’ll have made back your first couple of losses, as well as a $5 profit.

Sounds good, right? But what if you lose that $20 bet? You’d put down $40. Then $80. Then $160. After seven losses (which is not uncommon, happening about once in every 120 betting sequences) you’re laying down a $640 bet which if you win, will only make you a $5 profit. Suddenly it doesn’t sound quite worth it. It’ll be very easy to come up against your bankroll (the money you set aside to gamble with) very quickly and not be able to recover your losses. 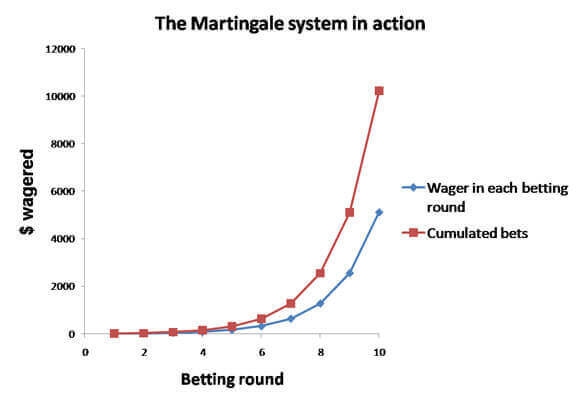 Secondly, these systems exploit what’s known as the Gambler’s Fallacy. A fallacy is a mistake in reasoning – if you hear the phrase “ all thumbs are fingers, so all fingers must be thumbs” you’d catch it out as faulty logic. You’ll have to apply the same critical eye to the realities of gambling which most people take for granted. Let’s take Roulette as our example: if you’re sitting at the table for six spins, and the ball has landed on Red, Black, Red, Red, Red, Red, how likely is the ball to land on Red again? On one hand, you’d think Red was on a roll, so it’s more likely to land on Red again. On the other hand, you’d think Black hasn’t landed in a while so it must be ‘due’, and that Black’s more likely to come up on the next spin.

Both these assumptions are wrong. Actually, there is still a perfectly even chance that the ball will land on Red or on Black. That’s because every ‘event’ (the spin of the Roulette wheel, the flip of a coin) is random, and it not affected by the events that went before it. Even if the ball had landed on Red a hundred times in a row, the next spin will have exactly the same chance of landing on Red as on Black, because every event is random.

In a way, the gambler’s fallacy is a very understandable mistake. Human brains are geared to find patterns, it helps us survive and triggers learning. If we reached for a hot plate and believed there was only a fifty-fifty chance we’d burn our fingers, we’d hardly make it through the day! But the downside of this evolutionary impulse to find patterns in randomness is that sometimes we impose patterns where none exist.

Think Before You Bet

Think Before You Bet, It is in your best interest to carefully consider a betting system before betting money on it! Rather focus on proven methods of gambling strategy and keep in mind that games that have obvious flaws in them that undermine the house edge would have been chucked out by casinos a long long time ago.